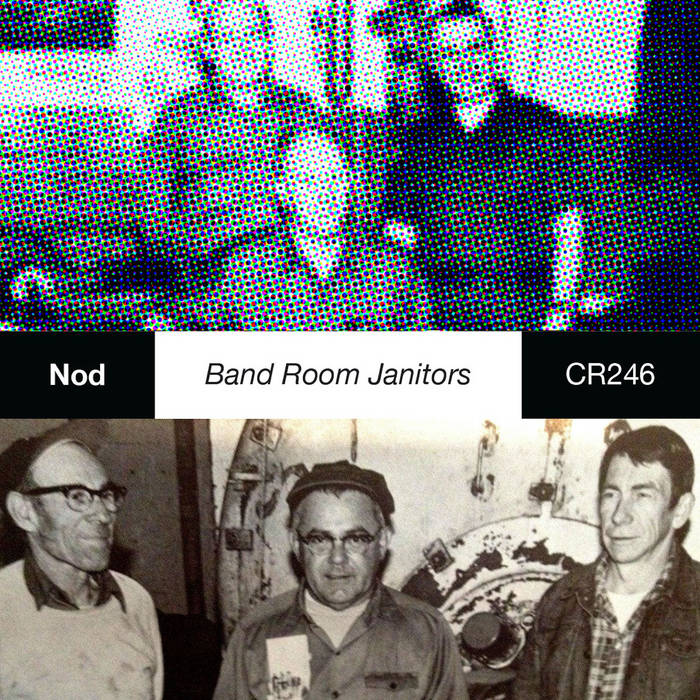 Carbon Records release of the cassette version including a download code is available here:
carbon-records.bandcamp.com/album/band-room-janitors


No one really knows when Nod first encountered the Band Room Janitors. Tim remembers going up on the roof of a school and eating stars by the shovelful. Brian says they had a quiet conventicle in a dusky basement of some far-out church. Joe remembers wearing foam boots and shimmering furs, and harvesting spores big as medicine balls as the Janitors infused him with a more sportive sound-mood. But on this the Nod boys agree: the setting was both classroom and playground, and they learned more from the Janitors than can be said in any language other than raw, tonal sound. “And they had cool uniforms,” Tim adds.
At any rate, the little-known gathering of the Nod trio and the Band Room Janitors (which probably actually took place at the BRJ’s Our Mother of Sanitary Aural Improvocation School, location unknown) represents a solemn and transcendent summit. This recording, recently unearthed from an excavation site on Universe-City Avenue, in Rochester NY, represents Nod’s best effort to interpret the magical, janitorial tones of the BRJ.
Nod took years to lovingly plant and cultivate the magnetic particles on this tape so that the distinct pattern best represented the songs that the Janitors revealed to them before their mysterious disappearance. The resulting recording is a tribute like no other. There are epic stories here, for those who listen with nimble ears: mythic tales of darkness and lightness (“Adaption”, “Gas Trips”), of dogs and monsters (“Huskies Out”), of ants and astrologers (“Ant Farm March”, “Space Saw”), of heroes (“Lt. Smokey Rivers”), virgins, zeroes, and villains (“Bar Fight”). There are also some damn heady philo-sonic treatises (“Master Blend”, “Overture”, “Voxclapaphone”) and intensely detailed landscapes painted with sound (“Woodstock Parking Lot”, “So Slow Yanomamo”). The remaining instant compositions on the recording simply defy any attempt at description. You’ll see, but you won’t believe.
So clean your windows, dust your brooms, and wax your hardwoods with the sinuous and airy songs of The Band Room Janitors, as brought to you by their loving disciples, Nod.